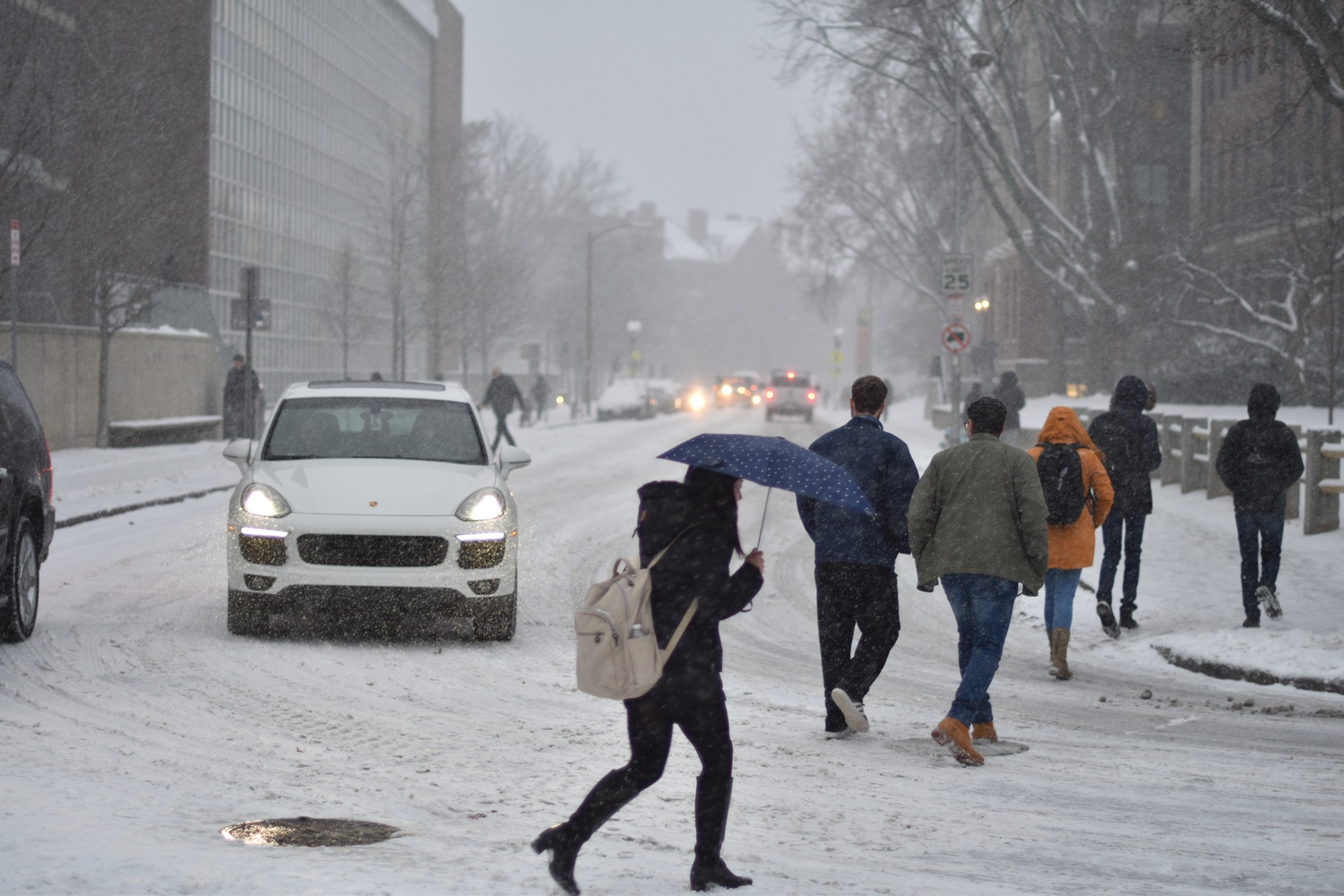 The first week of March was a hectic one on Harvard’s campus. Many juniors spent the weekend going to various festivities for Junior Family Weekend. Many others spent hours in their favorite study spots in anticipation of the start of midterm season. And, on top of all of this, there was a snowstorm on the third night of the month that left the Boston area covered in almost a foot of snow.

Former Dean of Students Archie C. Epps III once remarked that “Harvard University will close only for an act of God, such as the end of the world.” Indeed, the University was open for normal operations that Monday, and students were notified of that fact in emails sent both the night prior and morning of.

I woke up on Monday dreading the journey to class. Even as a native New Englander, this winter has been an especially difficult one. I decided to wear my work pants (covered in exterior paint from my summer job), tied my boots, put on a hoodie and a jacket, and braced myself for a trek through the snow.

When I opened the dorm door, however, I saw the one thing I did not anticipate: pavement. In fact, as I walked through Harvard Yard and beyond, pavement was all I saw. The trek to Northwest Labs that I anticipated lasting 20 sock-drenching minutes was over in its normal time, and my feet were warm as ever. I was amazed at what felt like a March miracle, but then I thought about my first two semesters at Harvard.

The first of March was not the first time in the 2018-19 school year that it snowed in Harvard Yard, nor was it the first time that I had a too-easy walk to my classes. It was the first time, though, that I had not expected to have an easy path to class. Frankly, I was disappointed in myself. It took a winter storm warning for me to realize the effortless journey through Harvard I had accepted as normal was actually something to cherish.

I think many of us take for granted the clear-pathed and lively Yard that we walk through every day. I certainly did. That is a huge testament to how amazing the Harvard Landscape Maintenance team is.

New England winters are relentless, and both plowing and shoveling during a winter storm are ridiculously difficult. My dad owns three pizza stores, and he dreads nothing more than having to plow his stores’ parking lots. On top of the objective physical difficulty of shoveling and plowing (the latter can do a toll on your arms, back, and general body due to heat inside the cab), shoveling snow with the intention of completely clearing pavement is mentally fatiguing, as well.

The objective of completely clearing a walkway of snow is a war of attrition. You can’t let snow pile up too much, or the snow on the bottom will freeze, leaving black ice for people to slip on when everything is shoveled. As a result, shoveling snow during a snowstorm is an hours-long rotation between plowing, shoveling, and salting. All the while, your body gets very hot, but if you take your coat or other layers off for too long, your body will get a chill that takes hours to recover from.

Trying to win against snow is an all-around thankless task, and we are lucky enough to benefit from the work of men and women who do just that on a regular basis. On multiple occasions, I’ve had to dodge trucks plowing through Harvard Yard in the middle of the night. I’ve passed people shoveling the stairs of Lamont at 3 a.m. The men and women driving those trucks and wielding those shovels are doing the work that no one wants to do, the work that makes thousands of people’s lives easier. And they deserve a thank you.

So the next time you want to complain about our lack of snow days, I encourage you to thank a member of the Landscape Maintenance team instead. It is their work — work that is so consistently spectacular that it often goes completely unnoticed — that keeps Harvard going, wind, rain, or shine.

So thank you, Harvard Landscaping Maintenance team. Only the end of the world might stop you — and I strongly emphasize the “might.”