Goals On and Off the Field: Fred Asare-Konadu Gives Back to Florida Youth, Seeks Legislative Changes in Washington 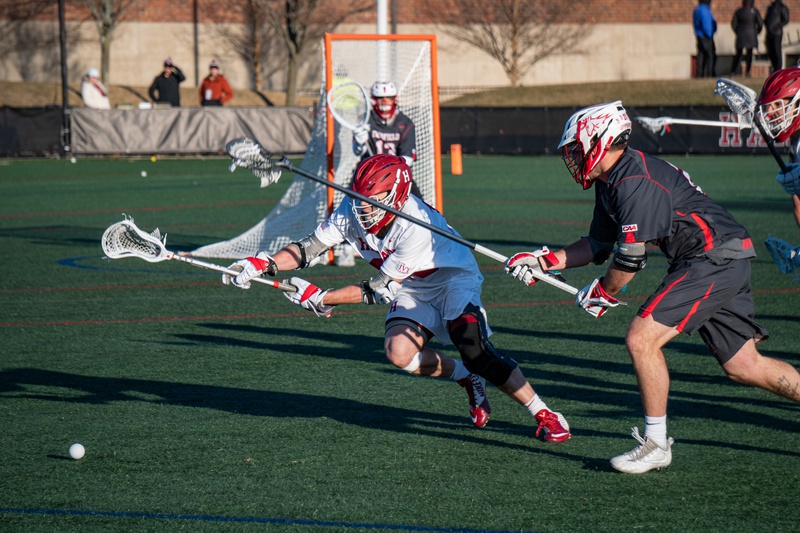 Harvard men's lacrosse competes in a 15-12 victory over Fairfield in its most recent game on March 7, 2020. Junior midfielder Fred Asare-Konadu had led voter registration efforts in his home state of Florida.

Spurred on by the 2020 police killings of George Floyd and Breonna Taylor, junior Fred Asare-Konadu decided that in order to counteract the tragedies, he would empower future generations of citizens with the tools and resources necessary to enact social change through the power of the vote.

Asare-Konadu, a midfielder for Harvard’s men’s lacrosse team, ultimately partnered with his high school friend John Bedell, now a freshman at the University of Virginia, to found a movement called We Go Vote.

Asare-Konadu realized that he could take advantage of Florida’s requirement that each student graduating from high school participate in a government class. By creating a system to deploy in the classroom, he aims to give students the opportunity to pre-register to vote when they turn 16 so that once they are able to participate in local and national elections, they won’t be barred by the act of registration.

Asare-Konadu emphasized the importance of educating students in a swing state like Florida, which is often hotly contested in presidential elections. The state houses differing political ideologies, with the north being much more conservative than the democratic south.

“We fully believe that voter registration should be something that is bipartisan,” Asare-Konadu said. “What makes a democracy a democracy is the fact that there is freedom of thought. We don’t want to be in a situation where we are only registering people with similar viewpoints.”

In particular, he stressed the importance of a diversity of thought, especially since he began his endeavour during a politically polarized time.

“I started the voter registration initiative in the midst of the whole George Floyd movement, seeing a lot of my friends who kind of sat on both sides of the aisle come together for a common cause …. I saw an opportunity to put more power into the hands of my friends, and let them do the voting,” Asare-Konadu added.

The group was conceptualized during the 2020 election, when there was an emphasis on registering as many eligible citizens as possible.

Asare-Konadu took advantage of the influx of voters. He saw a niche in the younger population, recognizing that by incentivizing teachers to stress the importance of participation in local elections rather than solely national ones, he could pass on the tools for gradual change to thousands of students. He, as a student himself, was able to identify with his target audience and engage them through accessible resources.

The movement has been so successful in Florida that Asare-Konadu is looking to both expand his work to states with similar government requirements, as well as turn his work into permanent legislation. His aim is to introduce educational tools to teachers, mainly through the slides developed by himself and Bedell, and make it mandatory to provide the information to students so that they might be able to register.

Asare-Konadu has been in touch with different legislators who are backing his bill both in the House and Senate, and is hopeful that his legislation will eventually pass through both branches, but thinks that it will realistically take multiple legislative cycles.

Making large-scale change requires perseverance, which Asare-Konadu attributes to the lessons he has learned on and off the sports field.

“Sometimes you have to make the best of the opportunities you have,” he said. “It’s about building yourself back up and doing your best to make things happen.”

In between meetings with politicians and district superintendents, Asare-Konadu is forced to juggle classes and his responsibilities with the lacrosse team.

“I think it really comes down to time management… I have meetings with legislatures probably once a week, or once every two weeks at least,” Asare-Konadu said.“And now we are working on endorsements. So scheduling … can be tough when you have practice one day [and have to balance that with] people working nine to five. I have classes, I have practice, I have other things I need to do…. I do my best to make everything happen.”

He added that his teammates have not only shown an immense amount of support for him and his work, but have engaged with it so much that they now look to aid him in bringing new aspects and nuance to his work.

Balancing outside opinion with the core values of the organization is something that Asare-Konadu is working on now as he looks to recruit people to help him grow the movement.

Asare-Konadu is confident that he can continue his work during an already demanding lacrosse season. He feels supported by his coaching staff and teammates, and attributes this camaraderie to values of hard work, self-respect, and dedication established by Coach Gerry Byrne. Additionally, he hopes that he can balance his political impact with helping the Crimson to a strong 2022 season, which will begin Feb. 19 against the New Jersey Institute of Technology.

–Staff writer Katharine Forst can be reached at katharine.forst@thecrimson.com.