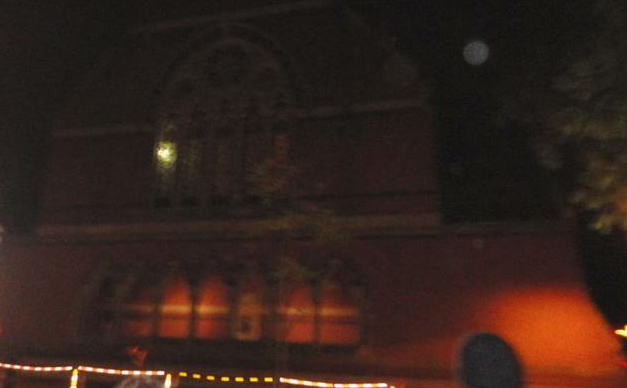 What is supposedly a ghost peeking through a window of Memorial Hall. By COURTESY OF BETSY RUNYAN

Harvard is haunted. Or at least, that’s what two separate companies claim in their guided ghost tours of Harvard’s campus.

The most recent paranormal sighting, according to Baltrusis, is Holbrook Smith, a College student who fought and died in the Civil War, only to return to campus to finish his exams post-mortem. Also among Harvard's spectral cast of characters is Fanny Appleton Longfellow, Henry Wadsworth Longfellow’s wife who died in a mysterious accident and has been spotted around Longfellow House.

Despite their shared subject matter, the two groups like to think they have little in common.

"Our tour is more the PBS of ghost tours," said Baltrusis. "Theirs is more theatrical."

While Cambridge Historical Tours instructs its employees to dress in period costumes and remain in character as historical figures, guides with Cambridge Haunts lead tours as themselves with no props other than antique-looking lanterns.

"Being in costume allows you to be fully immersed in the story and makes our tours a much more immersive and engaging experience,” said Christopher Schultz, co-founder of Cambridge Historical Tours. "It gives a wink and a nod to the audience that we're here to have fun and we're here to play."

Luckily for both groups, the demand may be great enough to sustain two haunted tours of Harvard Square.

Schultz said he estimated that close to 800 people have taken ghost tours with Cambridge Historical Tours and that he has presold 1,200 tickets for the upcoming weeks. Two thousand people have gone on Cambridge Haunts ghost tours thus far, according to Baltrusis.

Baltrusis, a journalist who recently published "Ghosts of Boston: Haunts of the Hub" and is in the process of writing a sequel about Harvard's paranormal activity, said he thought ghost lore is too often treated as mere myth.

"I wanted to debunk the misinformation," he said. "My tour is a history lesson with ghost stories."

Schultz said that although Cambridge Historical Tours also strives for historical accuracy, its goal is to entertain.

"Do I believe in the supernatural aspects?” he said. "I think they make a good story."