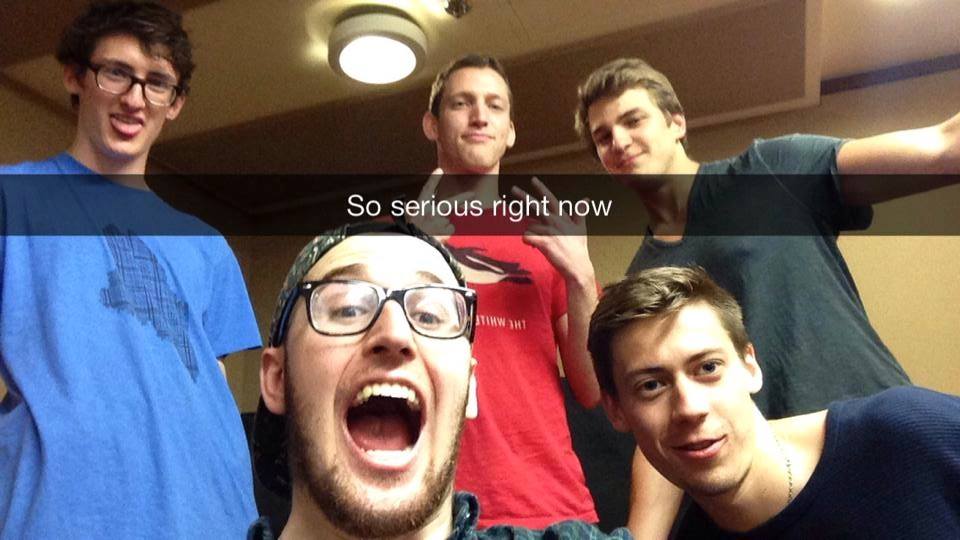 By Courtesy of Semi-Serious

Flyby sat down with Michael C. Slovenski ’15, George G. Mills ’15, and Matthew P. Sheets ’15 of Semi-Serious to talk Yardfest, Natasha Bedingfield, and chupacabras. The other two members of the band Liam Cassidy and Andrew Jarowenko are juniors at Tufts. Be sure to catch them on Sunday when they open for Janelle Monáe!

Flyby: If you could sum up your feelings about Yardfest in one word, what would it be?
Matt S: Hyped.
Mike S: Apathetic.
Matt S: Just hyped. Maybe we could do a list of three words? Hyped, apathetic, and…
GM: Terrified. I think that has a very Semi-Serious vibe.
Matt S: Because we over-analyze everything.
GM: I just close read everything.

Flyby: How confident were you at Battle of the Bands?
Mike S: We were honestly pretty apprehensive about it.
Matt S: I was up until like 6 a.m. on a mix of adrenaline, nerves, and redbull.
Mike S: We knew it was going to be fun but at the same time it was our first battle.
Matt S: You never forget your first battle.
GM: It was really cool to see how good all the musicians were. It was a good comment on how the Harvard band scene has grown exponentially since we got here.

Flyby: Will this be the biggest crowd you’ve played for?
Matt S: Hopefully. Otherwise some of our friends aren’t as good as we thought.
GM: We definitely played a pretty big show in Lowell B-52 but Yardfest should be much bigger.
Matt S: I think the battle was the biggest show we’ve played.
GM: Yeah, since the Brunswick High School Talent Show I’d say. We should start the hashtag #makeittoyardfest.

Flyby: Will you get to hang with Janelle before the show? After the show?
Matt S: George and I are so excited to hear your answer because we don’t know.
Mike S: From what I’ve heard, no. There’s no arrangement to my knowledge.
GM: It would be sick if she wanted to come on and do a song with us.
Mike S: We’re hoping to reach out to her a few hours before our set.
GM: Janelle could replace Mike and kick Mike out of the band.

Flyby: How did you get your name?
Mike S: Um bandnamesgenerator.com.
Matt S: Really?
Mike S: Just kidding.
GM: There was a lot of contention.
Mike S: Not really. We came up with it two years ago and we were just a three man group at that time. We were putting out some demos and we needed a name for ourselves and we came up with it—
Matt S: This is a tearjerker.
Mike S: We thought about how we felt about the sessions and how we want people to receive them.
Matt S: That was nice.

Flyby: Is it difficult to find time to rehearse?
Mike S: Yes, yup.
Matt S: Partially because two of the guys are at Tufts.
Mike S: We have to block out so much time including travel. Then on top of that, every time we add another person’s schedule to the mix things get more complicated. Some of us have jobs, some of us don’t have jobs, but do other things some times. Some of us own recording studios #quadsoundstudios.
GM: You make it sound like we’re running a drug cartel on the side.
Mike S: Side note, we are not a drug cartel on the side.
Matt S: Just comment on our Facebook page and we’ll get back to you. You’ll know the code word.

Flyby: Do you write your own songs or do you do covers?
Mike S: We do write our own songs, we actually try to mainly be an originals band.
Matt S: Before I joined they were all original. This semester we started playing gigs so we had to fill up the set time with covers. But we’re now trying to go back towards originals more.
Mike S: It’s fairly necessary to play covers at college gigs, but we try to stay original as much as possible.
Matt S: We just released a single called “This is Grace”. Check it out!
GM: We just released an EP and another single two days ago. It’s always fun to go huge on a Natasha Bedingfield song. It’s really cool for us, though, when people know the words to our songs. It’s a cool thing to write an original song and see your friends make out to that song.

Flyby: Imagine they get married and invite you to play at their wedding.
Mike S: Yeah, we could recreate that moment for them.
Flyby: How do you handle groupies?
GM: We’ll tell you when we have some.
Mike S: That’s the right answer.

Flyby: Long time goal of the band:
Matt S: Getting the chupacabra on the endangered species list. It’s an animal that lives in Mexico and attacks goats and lambs and sucks their blood at night. The point is that very few people have seen them, which probably means they’re endangered but they’re not on the list.
GM: It’s like the sasquatch, but real, but not.
Matt S: Oh also our guitarist is looking to sell a Boss loop pedal Alesis synth. He really wanted me to push this.

Flyby: I don’t think anyone will know what that is.
MS: It’s fine, don’t worry.
Mike S: Let’s do this again soon.
MS: We should have a weekly series and it can be called Semi-Weekly Series.