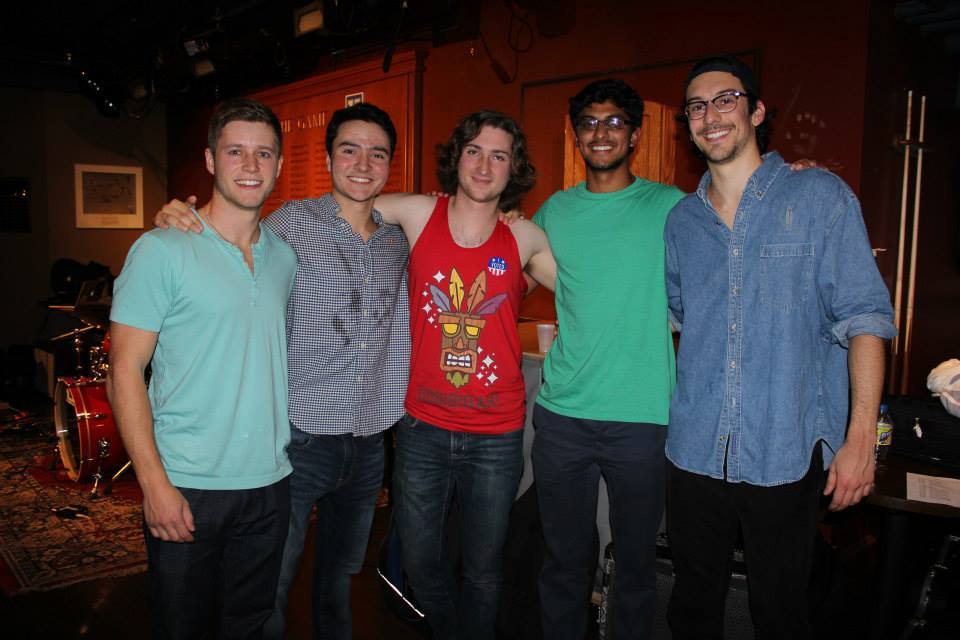 By Courtesy of Hot Breakfast

Flyby sat down to catch up with Hot Breakfast after their recent Battle of the Bands Victory.

We touched base with Mike Senter-Zapata ‘14, Paul Castrigano ‘14, Pranav Krishanan ‘16, and Sam Berman Cooper ‘14 about how they’re feeling about their Yardfest performance on Sunday. Not present for the interview was drummer Mateus Falci ‘14.

Flyby: How are you guys feeling about Yardfest?
PC: We’re really excited. We thought that winning the Battle for Yardfest was the culmination of the semester up to this point. Pranav?
PK: Yes, Paul? We’re just really excited and grateful for the opportunity.
SBC: I’m so excited to be opening for Janelle Monae, she’s one of my favorite artists.  The chance to play Yardfest my senior year really just represents everything I could have hoped for this spring.

Flyby: How many songs do you plan to play?
MSZ: We’re aiming to hit seven or eight.

Flyby: So this is the first time you’ll be playing a venue as big as Yardfest, you guys nervous about that?
PC: Before any show we get a little nervous. It will be no different this time around. But once we get into the groove after a song or two it’s usually fine and we don’t feel the nerves. Also, we’ll probably be a little buzzed.
SBC: As will everybody else.

Flyby: Pre-show rituals?
MSZ: Oh triceps!
PC: We huddle, it’s pretty bro-y.
SBC: We do push ups.
PC: Sometimes we work out together to look better. We usually do a group huddle and focus up to get us in the zone.
SBC: We beef a lot.

Flyby: Beef?
PC: It’s like an inside joke. We don’t even know. It started with our drummer.
MSZ: We don’t know what it means, we just say it.
PC: We make fun of ourselves. Self-deprecation.
MSZ: Deprecation? I think you meant self-defecation, Paul.
PC: Pre-show ritual: we make sure that Sam is in the right state of mind sometimes.
MSZ: The group huddle is as close as we have to a set ritual.

Flyby: Are you guys all seniors?
PK: No, I’m a sophomore.
PC, SBC, MS-Z: Softmoooree.
PK: They’re all going to graduate and I’ll still be here all alone.
MSZ: We’re trying to get Pranav to take time off from school and tour the world with us.

Flyby: Pranav, will you form a new Hot Breakfast?
PK: I was thinking more like Cold Brunch. I don’t think I want to start a band though, I’ll definitely join one.

Flyby: How do you feel, Pranav, about being the one left behind?
PK: I’m in a dark place, guys. I’ll miss you guys though, we’ve only been together for one semester.

Flyby: How do you handle your groupies?
PC: What groupies?
SBC: They’re just dudes.
PC: We don’t have girls throwing themselves at us.
MSZ: We have guys taking off their shirts and throwing them at us.
PK: Which is cool, until I cry at home at night.
PC: We actually have a song about that, which we’re recording now. We’re going to play it at Yardfest.

Flyby: Half the people at Battle of the Bands left after you guys finished playing. You obviously have a huge following. What do you owe that to?
PC: By this point, we’re seniors, so we have bigger networks and groups of friends. Our friends have been really good fans and they’re always bringing people and bringing excitement to our gigs. They make us feel popular and loved, which makes us play better and them enjoy it more.
SBC: We’re so grateful for our fans because they come to everything. Some of our fans know our set better than we do.
PC: They’re like “oh you messed up!” We owe our gratitude to blockmates of ours, a lot of the guys in the Fox, the Oak, the Opportunes, Eliot Cockpit, and people from the Co-Op.

Flyby: Will Janelle be invited back to the Fox after the show?
PC: Is that a thing? Tyga left right after the show last year.
SBC: I’m probably going to propose. I think I’m going to get a ring, not an expensive ring. You know, one of those plastic Burger King rings.

Flyby: You should get her a ring pop!
SBC: Yeah, a ring pop, exactly. Who would turn that down?
PC: Probably Janelle Monáe.

Flyby: Favorite hot breakfast item, it could be a person in the band or a food:
MSZ: Sausage.
PK: I don’t eat breakfast.
SBC: Dude, dude, corn beef from Jim’s deli. Oh my god, that will knock you out.
PC: Yeah sausage.