Open Letter to First-Years: Blocking's Not That Deep 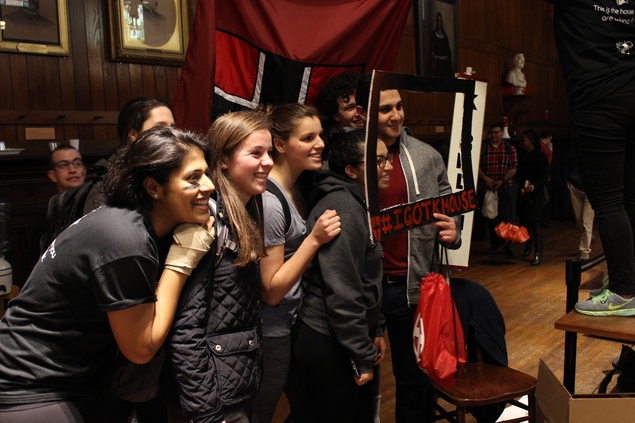 You’ve almost made it to Housing Day, the one day of the year Harvard actually shows some school spirit (other than slapping on a red sweater and invisible drunk goggles for Harvard-Yale). Housing Day is one of Harvard’s best remaining traditions (RIP Harvard Time). Truly, it’s a blast — upperclassmen get up at stupid hours of the morning, throw on house gear, and storm the Yard to tell you what house you got.

But for all the fun Housing Day brings, some parts of it can be stressful — namely, blocking. We’re here to tell you that blocking is really not that deep.

Some people will be best friends with their blockmates all four years, some blocking groups dissolve before the end of the semester — and that’s okay. You get here in August, and Harvard basically tells you, “ Welcome! Here’s a new type of schedule! We get that you’re (likely) living on your own for the first time, that there are thousands of clubs to join, and that you have more freedom than you’ve ever had in your whole life, but you’ve got six months to make your lifelong best friends that you want to live with for the remainder of your time here. Piece of cake!”

Take a breath and remember that friends don’t disappear just because they’re not in the same house. There are best friends who live in the Quad and Mather and make it work even through the “long distance” jokes.

If your blocking group is so big it’s threatening to leave someone out, don’t be mean and exclude someone — just split the group and link. No, don’t look at us like that. Just do it. It saves a whole lot of drama and keeps people’s feelings from being hurt. Pull names out of a hat to split the group if you’re really that pressed. You’ll still be in the same neighborhood.

Conversely, if you don’t have someone in mind as the deadline looms closer, or if all the blocking drama reveals how shallow your “friends” are, remember that floating doesn’t make you lame or a loser. It’s easier than you’d think to make new friends once you get to your house. In fact, being a floater might encourage you to get more involved in your house community next year, and meet even more awesome people!

Your blocking group does not have to be made up with your ride-or-dies or people you want to room with. It can be, but it doesn’t have to. (In case no one’s told you, you don’t actually have to lottery to room with your blockmates, a blessing if you’ve got some messy friends or everything falls apart). Your blocking group, at its most basic level, should be made up of people you wouldn’t mind seeing around the dhall for the next three years.

So fret not, first-years! Focus on the fact that every house has its perks and on the excitement of Housing Day, not on whether your blocking group will be the most iconic of all time. We promise you, it won’t be. At the end of the day, it’s really not that deep.