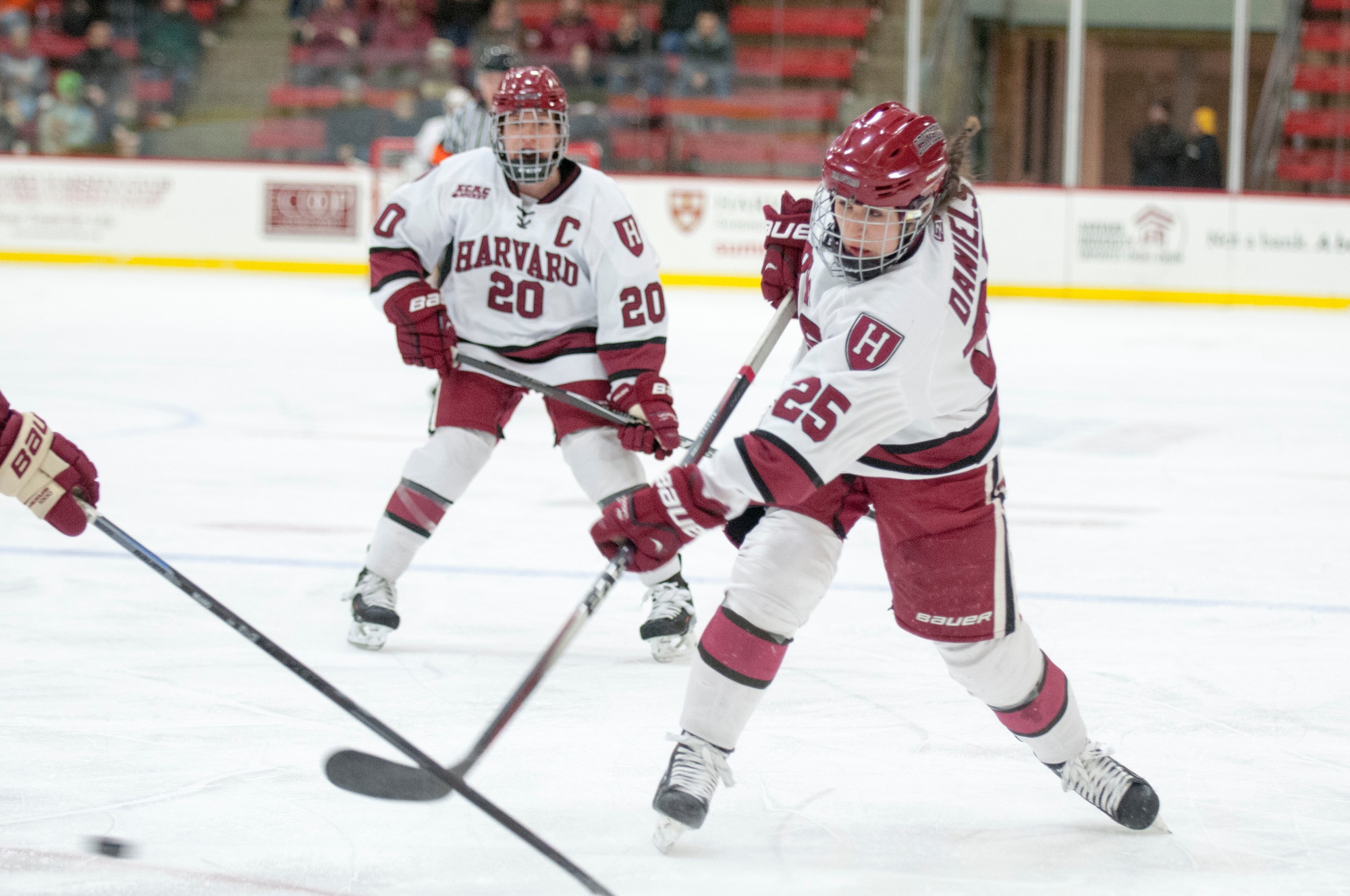 Sophomore Sydney Daniels takes a shot against Boston College in the Beanpot finals. The Crimson downed their local rivals, taking home the title with a 3-2 victory. By Mark Kelsey
By Ariel Smolik-Valles, Crimson Staff Writer

On the ice at Ridder Arena in Minneapolis, over 1,100 miles from home, the Harvard women’s ice hockey team had the program’s first NCAA title within reach. But 60 minutes of play later, that same ice was cleared smooth once again, and the Crimson watched another team, hometown favorite Minnesota, hoist the trophy in victory.

This moment in late March is critical to understanding the 2014-2015 season, but even more noteworthy, perhaps, is the tale of a journey that landed the team in contention for the national championship.

The beginning of the season marked the return of coach Katey Stone from her time at the helm of Team USA at the 2014 Sochi Olympics. Seniors Josephine Pucci and Lyndsey Fry as well as junior Michelle Picard returned with Stone, bringing with them the experience of playing in the Olympic theater. After spending a year away from Cambridge, the players were welcomed back, with Picard stepping right into one of the captain roles.

The atmosphere into which the Olympians returned was one of continued success, as interim head coach Maura Crowell led the team to an ECAC semifinal appearance and a NCAA tournament bid last season. The program handed back to Stone was one ready to improve upon the success it had already experienced the year before, yet stacked with even more talent and questions about who would start and contribute.

“[Stone and the Olympians] were a huge reason why we were so successful this season,” co-captain Samantha Reber said. “We basically had the same team we did last year minus the few seniors we graduated last year.”

The Crimson encountered some early success, going 3-0-1 over its first four games. However, a 10-2 loss to a top-ranked Boston College squad on Nov. 28 provided the team’s first taste of adversity.

“I don’t think any of us had ever lost a game by that much in our hockey careers,” Reber said. “It was kind of shocking and was a wake up call because we knew we had so much more talent than that and so much more team chemistry. I think the game was the best thing that happened to us all season in the fact that it got us back to playing Harvard hockey.”

Reber was right as the loss proved to be somewhat of a blessing in disguise for the team, as it went on to win its next 10 games, including conference victories over then-No. 4/4 Quinnipiac and Yale.

Next on the Crimson’s list of feats to tackle was the Beanpot, which Harvard hosted at the Bright-Landry Hockey Center. Matched up against then-No. 6/6 Boston University in the first round of the tournament, the Crimson set the tone early, scoring two goals in the first period. The Crimson then exploded in the second frame, adding another five goals en route to a 9-2 win.

The win propelled the Harvard into the championship game for the first time in four years. All that stood in the way of a Beanpot title was top-ranked Boston College, who had been unbeaten through 28 games.

“I think our kids knew that they had gotten embarrassed by BC in November,” Stone said. “We knew we had gotten better. We were stronger internally, and we were able to show it. Our kids were ready to go that night, and that night gave us a lot of confidence.”

The rematch proved to be a hard-fought battle between the two ranked programs.

The Eagles struck first in the contest, sneaking a goal past Crimson junior goaltender Emerance Maschmeyer within the first two minutes of the game, but junior forward Mary Parker evened the score later in the period to knot the score at a goal apiece. The Eagles crept back into the driver’s seat at the 8:18 mark of the second period, but the goal was answered a little over a minute later by freshman forward Karly Heffernan.

The deciding score came off the stick of junior forward Miye D’Oench midway through the second period. On a power play, D’Oench capitalized on a rebound in front of the BC goal to put Harvard in front for good. 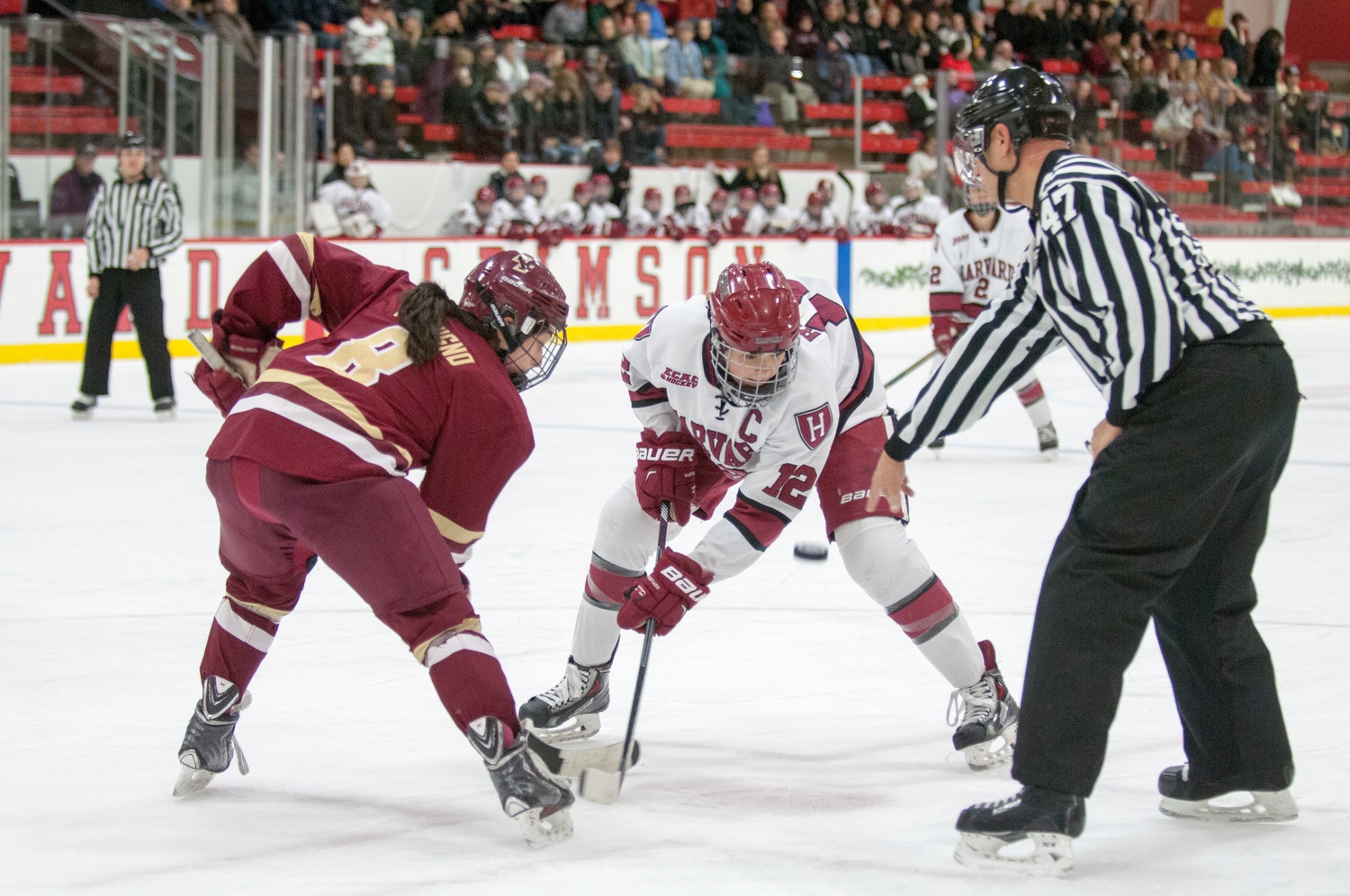 When the final buzzer sounded, Harvard had not only pulled off the upset; it also had sealed its first Beanpot championship in five years and the 14th in program history. The victory was complete when, after the ice cleared, Maschmeyer took home the MVP trophy.

“It’s always rewarding getting those kind of awards,” Maschmeyer said. “But in my position, I really have to rely on my teammates to make me look good. They work hard in order for me to look good, so I have to obviously acknowledge them.”

With the Beanpot trophy in hand, the Crimson skated into its final weekend of the regular season a week later with a three-point edge in the ECAC standings.

In the penultimate game of the regular season, St. Lawrence maintained tempo with Harvard, forcing a 1-1 tie at the end of the night. Sophomore forward Sydney Daniels netted her 16th goal of the season, and Maschmeyer made 31 saves in goal, but the offensive could muster no more than that one score.

The tie placed a critical importance on the following night’s contest, as Harvard’s lead over Clarkson in the league standings had shrunk to two points. A victory or tie for the Crimson would be enough to clinch the conference crown, while a loss would force a tie atop the ECAC and give the Golden Knights the top seed in the playoffs. And in a hard-fought battle on Senior Night at the Bright, the Crimson failed to capitalize on its opportunities, falling to Clarkson, 1-0.

“The series that we had with St. Lawrence and Clarkson at the beginning of the year where we only got one point out of the weekend kind of happened again this series, and it made us kind of get our hunger back,” Stone said. “Sometimes you need a little kick in the pants to make sure you’re focused and prepared and on your toes.”

The loss proved to be just what the team needed as Harvard steamrolled to its sixth ECAC tournament title the following weekend after beating Yale, Quinnipiac, and Cornell en route to the trophy.

While the team celebrated its championship win, news of its seeding in the NCAA tournament came through. The Crimson earned the third seed and a date with Quinnipiac in the first round of the tournament, setting up the fourth matchup of the season between the two teams.

Just as it had done three times before, Harvard defeated the Bobcats, this time by a score of 5-0, bringing the Crimson one step closer to the ultimate goal of a national championship. But the win pitted Harvard against a familiar foe—Boston College.

In the rubber match against its crosstown rival, the Crimson came out victorious once again behind 43 saves from Maschmeyer. A 2-1 win over the Eagles landed the team in the NCAA championship game for the first time in 10 years.

In 2005, the Crimson faced Minnesota in the title game, and history would repeat itself a decade later. Held on the Golden Gophers’ home ice at Ridder, the national championship game drew a sellout crowd.

“The atmosphere in the building was unlike anything I had ever played in before,” Reber said. “It was pretty insane…. We almost sold out the rink for both games. I would go to a faceoff and try to tell my linemates what we were going to do, and they could not hear me because it was so loud.”

Harvard kept close with the hosts for the entire game. After going down 1-0 early on, the Crimson offense could not convert until the third period when Minnesota already had a two-goal lead. The Golden Gophers answered Harvard’s scoring conversion with one of their own, widening the gap to 3-1. An empty net goal at the 18:12 mark of the third period then sealed the national championship for Minnesota.

Despite the fact that Harvard was unable to bring the NCAA trophy back to Cambridge, Stone recognizes that the season will go down as one to remember for the program.

“I thought we had a great season,” Stone said. “We had great leadership, great execution, and had a ton of fun along the way.”