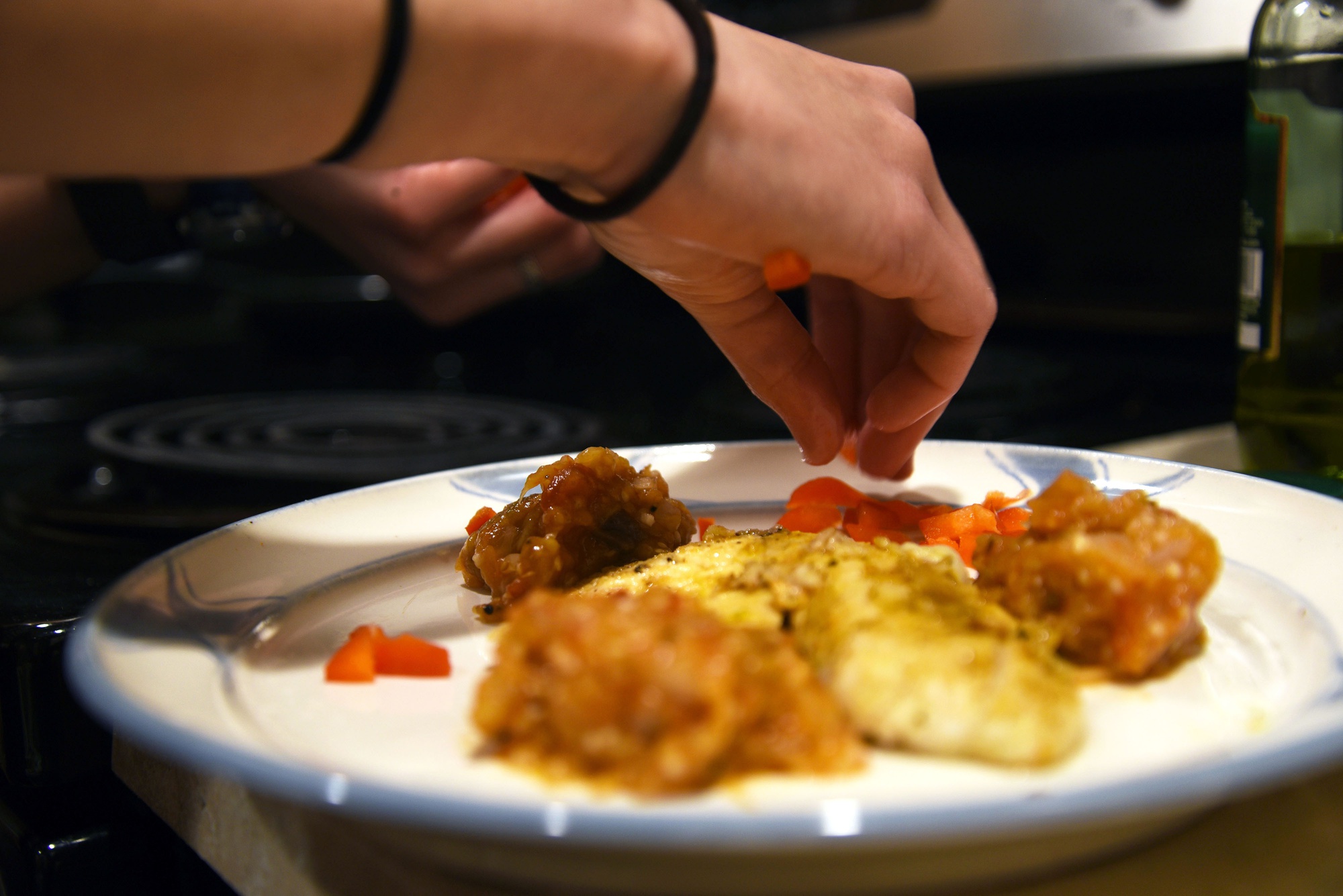 A Table for Two

One chef. One critic. One pan-seared tilapia with eggplant ragu.
By Amelia G. Miller and Ana S. Olano

Athena Braun ’19 is an amateur chef from Philadelphia, PA. Bovey Y. Rao ’19 is a aspiring food critic from Draper, UT. FM brought these two culinary frosh together to cook, eat, and talk food. The following interviews have been edited and condensed for clarity. 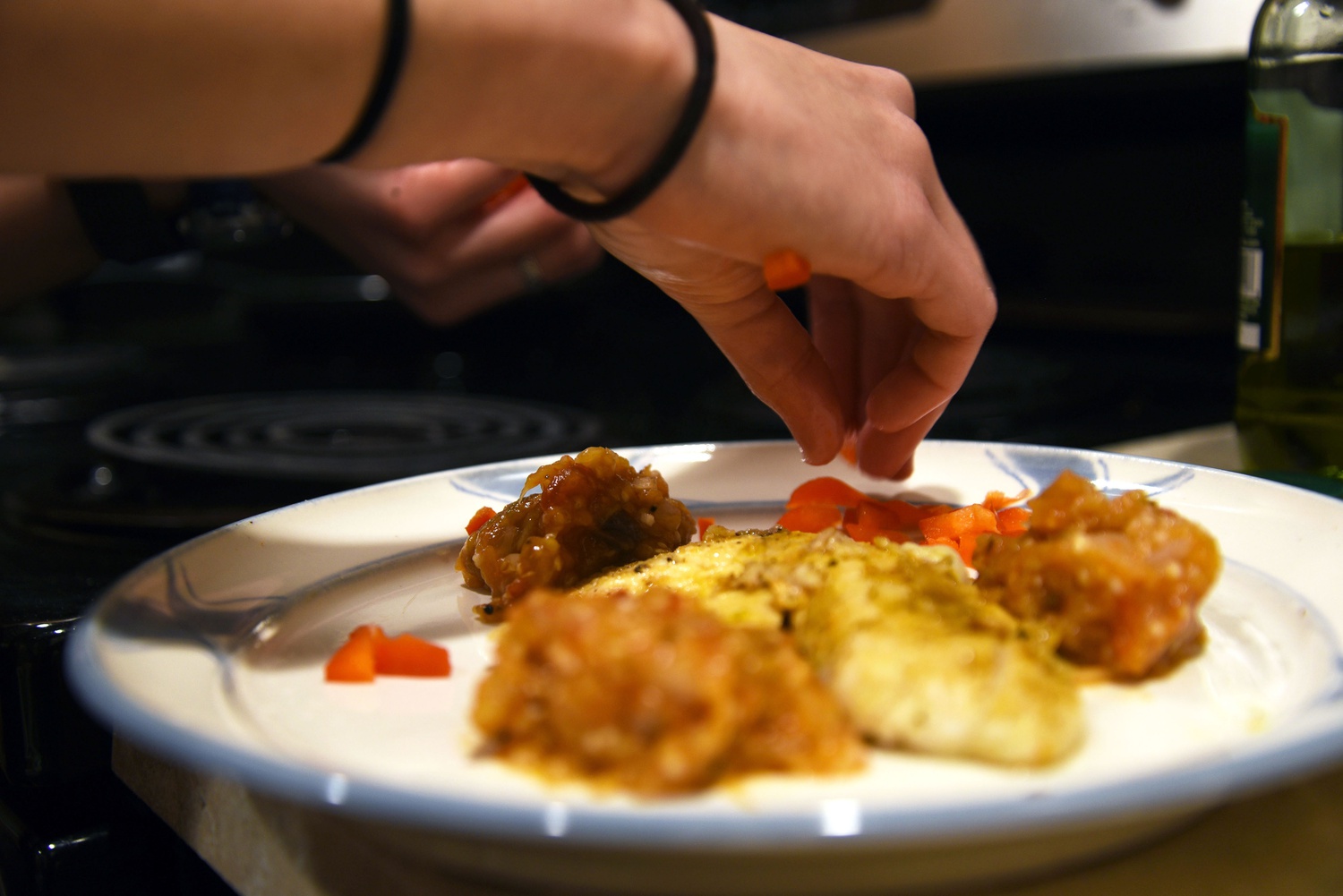 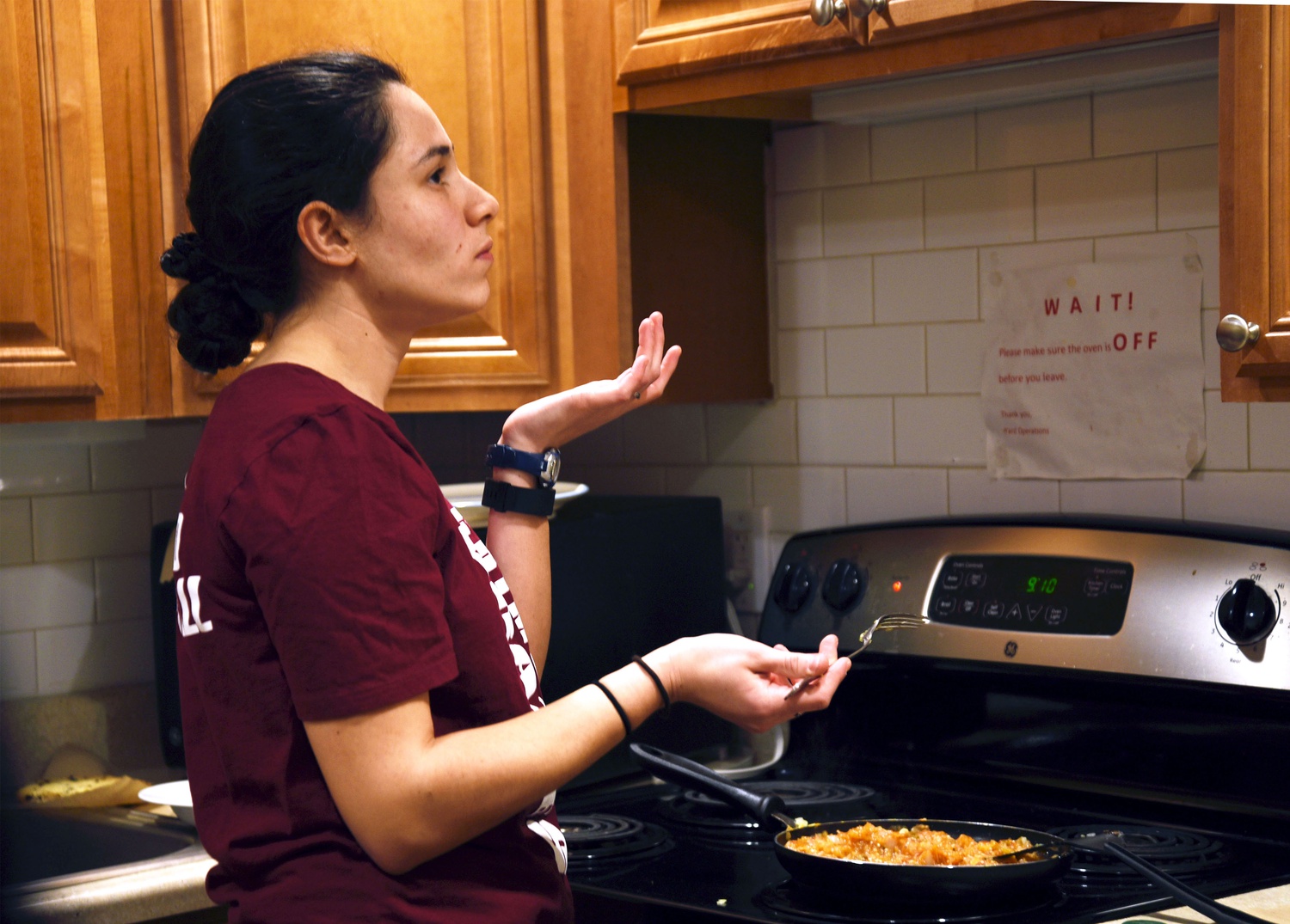 Chef's Taste Test - Athena Braun '19 tries a bite of her cooking while preparing a dish for food critic Bovey Rao '19 on Thursday evening. 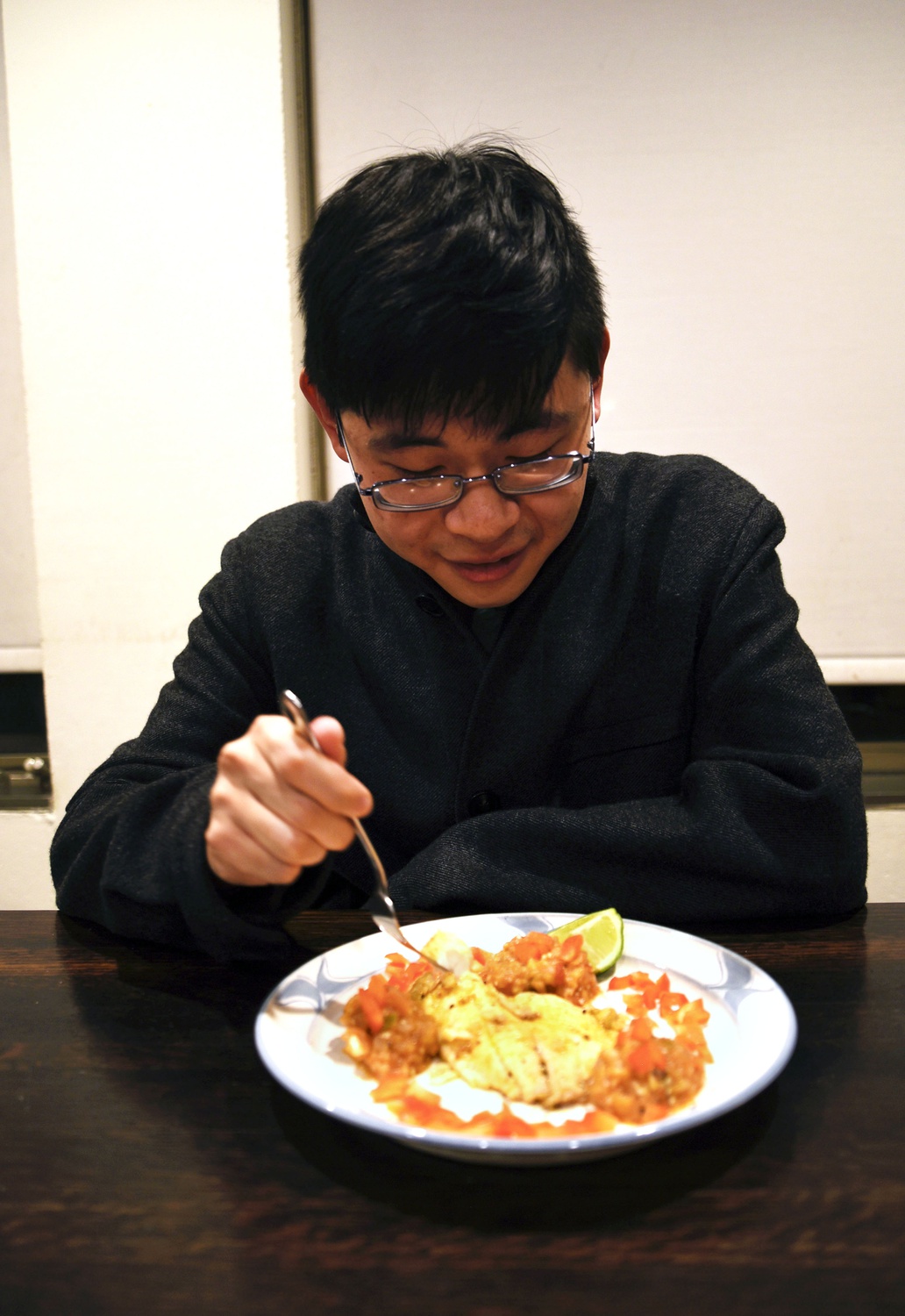 Do I call myself a chef? No.

Bovey came in and asked me how long I sweated the onions for and I was just like, “What does that mean?” I’m not technical. I cook for taste.

My mom used to cook a lot for me and my grandfather. She would cook things like arroz con avichuela, seared meats and pork chops and bistec. I wasn’t allowed to use the stove as a little kid, but I was allowed to season and knead the meat. I got into it that way. It was always something she and I would do.

A lot of the things that I’ll make will be bean based. Tomato based. I have a jar of adobo that will last me a year. We cook with that in everything. Everything with onions, everything with garlic. I don’t think I’ve ever cooked a dish that didn’t have that. Even scrambled eggs.

This plate is a pan-seared tilapia with an eggplant ragu. This is actually something that my mother would make for me when she would come home after working all day. The appeal of this dish is that it’s quick. And all of this is less than $20.

The fish is cooked in a pan with some garlic and seasoning. I rubbed in the seasoning so the flavor would permeate. I took a whole eggplant, stabbed it a few times, and then nuked it in the microwave. Then I scraped it out of the peel, seasoned it by itself and cut it up so it wouldn’t be chunky. After marinating the onions in vinegar and salt—it makes the onions a little bit sweeter—I fried the onion in the same olive oil as the garlic. I folded in the eggplant, then the sauce.

I don’t cook for aesthetics. This is the prettiest dish I have ever made and it came out really nicely. The fish didn’t break in the pan; I was so careful with that. And I topped it off with some raw red peppers because they add a little bit of color.

I enjoy cooking for other people more than for myself. If other people enjoy it, then I enjoy it. And I have more if you guys want some.

I guess it started in sixth grade. I’d always see my mom and dad cook in the kitchen and I’d always want to help out, and they let me at one point, similar to Athena. But more than cooking, I really enjoyed eating. I think that’s a commentary a lot of people probably have.

So I really got into reading about food. I read Jonathan Gold. He’s the current Los Angeles Times [food critic]. He’s one of the people I look up to. And I read a lot of other narratives [about] food, like Michael Pollan. He wrote The Omnivore’s Dilemma.

I started writing about food this year. There have been a couple times when I have just gone by myself and had a very zen moment with the food. I was very intimate with the food. Just me and the food, nothing else. No distractions. The waiter would come by and I’d say, “No, don’t worry about it, I’m okay. I’m enjoying it.”

I put a lot of emphasis on giving myself enough time. My meals will take three hours. I look for flavors that really stand out to me, or something that invokes a really powerful memory. It’s something that can leave an impression, whether it’s presentation, or flavor, or even just the smell.

A lot of times I do like going with friends, because I think food should be a communal experience. It also lets you try more things in one sitting. If I’m by myself, I can’t just spend 50 bucks on food. They’ll ask “What do we get, Bovey?” and I’m like, “You should decide for yourself sometimes.” It’s good to have some personal preference.

I think I have a very different palate from a lot of people because I spent some of my childhood in China. This summer, I ate jellyfish and pig ears. I’m accustomed to it now. A lot of things people wouldn’t normally approach, I’m a lot more open to. I think every cuisine, every culture has [its] own specialty.

Athena’s dish today is really good. I like the addition of the salsa, actually. It gives it a real kick. It’s not something you expect from eggplant normally. The fish is very well-cooked. It’s well seasoned, at least for the eggplant mix. Maybe if she had marinated the fish, you could get a really good depth of flavor in it.

I try not to be really critical of restaurants, because I think they are a lot about the artist inside. They’re putting an effort in, so you just try and appreciate what they’ve given to you. You’re seeing a chef’s passion, their life’s work—an art form, almost. That’s important to me.

An earlier version of this article misspelled the name of the author of The Omnivore's Dilemma. Michael Pollan authored the book.