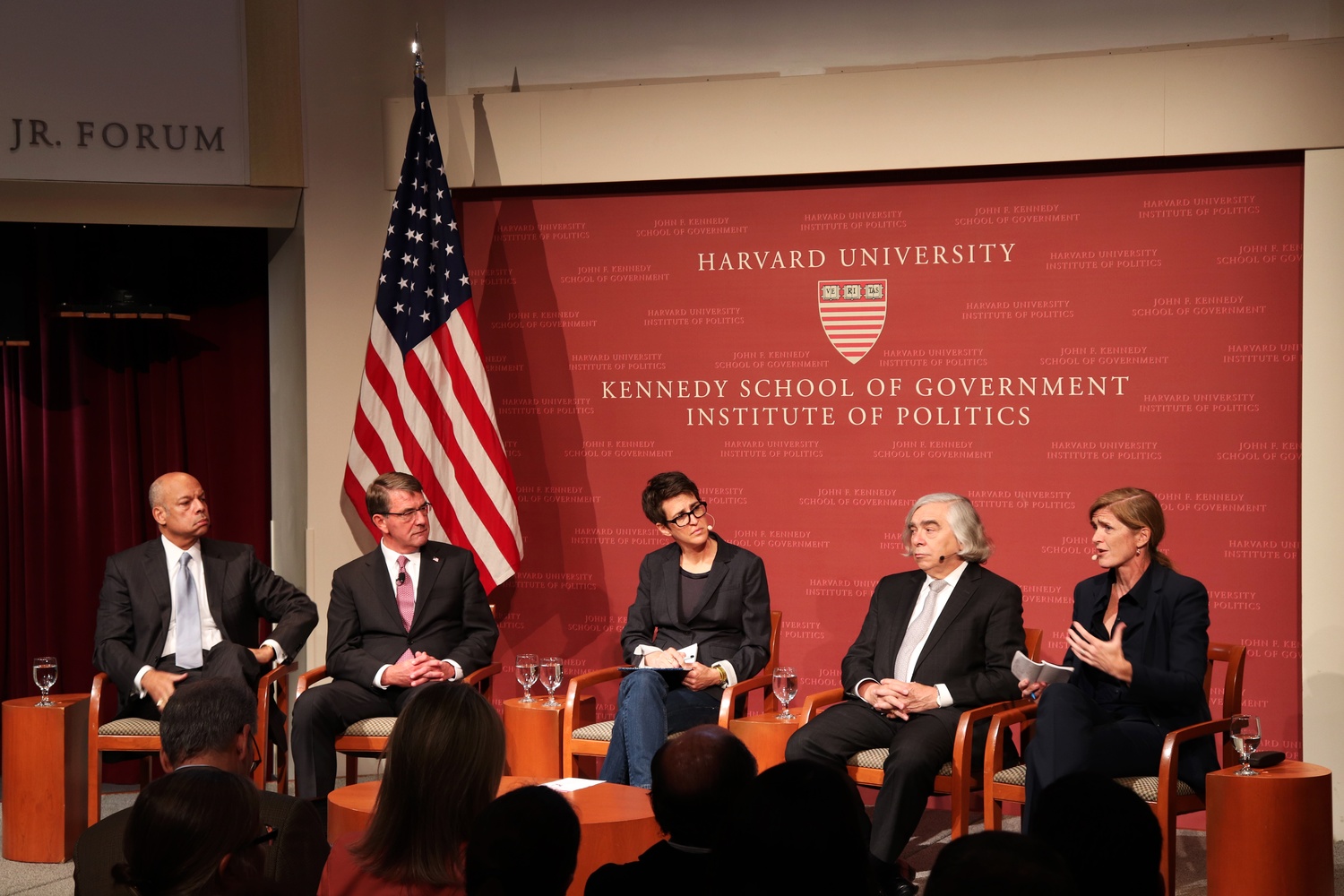 Maddow began the event on a light note before moving to a more substantive discussion of America’s standing in the world.

“Let me just confirm at the outset that none of you are running for President,” she asked.

The panelists said national security efforts tend to be consistent across presidential administrations. Carter spoke about an American mission in Raqqa, Syria against ISIS that has “pretty much stayed on track” as an example of a continuous approach. But Carter said the Trump administration’s stance towards North Korea and Iran represent “the opposite direction than what was set” under the Obama administration.

“That’s one area where I think there may be a sharp discontinuity, unfortunately so,” he said.

Carter also criticized the erosion of norms in the “political space.”

“I think behaving oneself is pretty important. It’s partly [the President] no doubt, and it’s partly—you know after this campaign people feel like they’re loosed from the bounds of telling the truth, treating other people decently,” he said.

“Projecting American values is a national security imperative. It’s an enormous underpinning of what we can do and what we can do with allies,” he said,

Moniz said that a renewed interest in the American nuclear arsenal could be a “terrible mistake.”

“Is the role of nuclear weapons for deterrence? Or is it something we would use as a battlefield weapon?” he asked.

Power likewise lambasted the Trump administration for what she perceived as a failure to carry out a foreign policy that supported American values. She argued that China might be able to supplant the United States on the world stage without proper American leadership.

“We have a State Department that’s rewriting its mission statement to cut democracy promotion from even its stated purpose,” she said. “That’s a fundamental misunderstanding of the political capital we have around the world, and it allows China to step right in.”

Maddow also asked panelists what they might have done differently had they known that Trump would be elected. In particular, she quipped about Moniz’s successor as the Secretary of Energy.

“In your case had you had the crystal ball that told you Donald Trump was going to win the election, I think that crystal ball still would not have told you that your successor would be Rick Perry,” Maddow said.

Moniz said he would not have changed much about how he led the department had he known about Trump’s victory.

“We had very clear objectives across our various missions, nuclear security being one of the big ones, but energy, basic science, et cetera,” Moniz said, “I think our department was remarkably nonpartisan, and viewed as such in the Congress. And that does provide stability.”

Maddow said farewell after audience questions and praised the accomplishment of the panelists.

“It’s an honor to be here today, but it also just makes me proud of us as a country to have had the wealth of intellect and civic good-heartedness that is represented on the stage, having held such positions of power in our government,” she said.