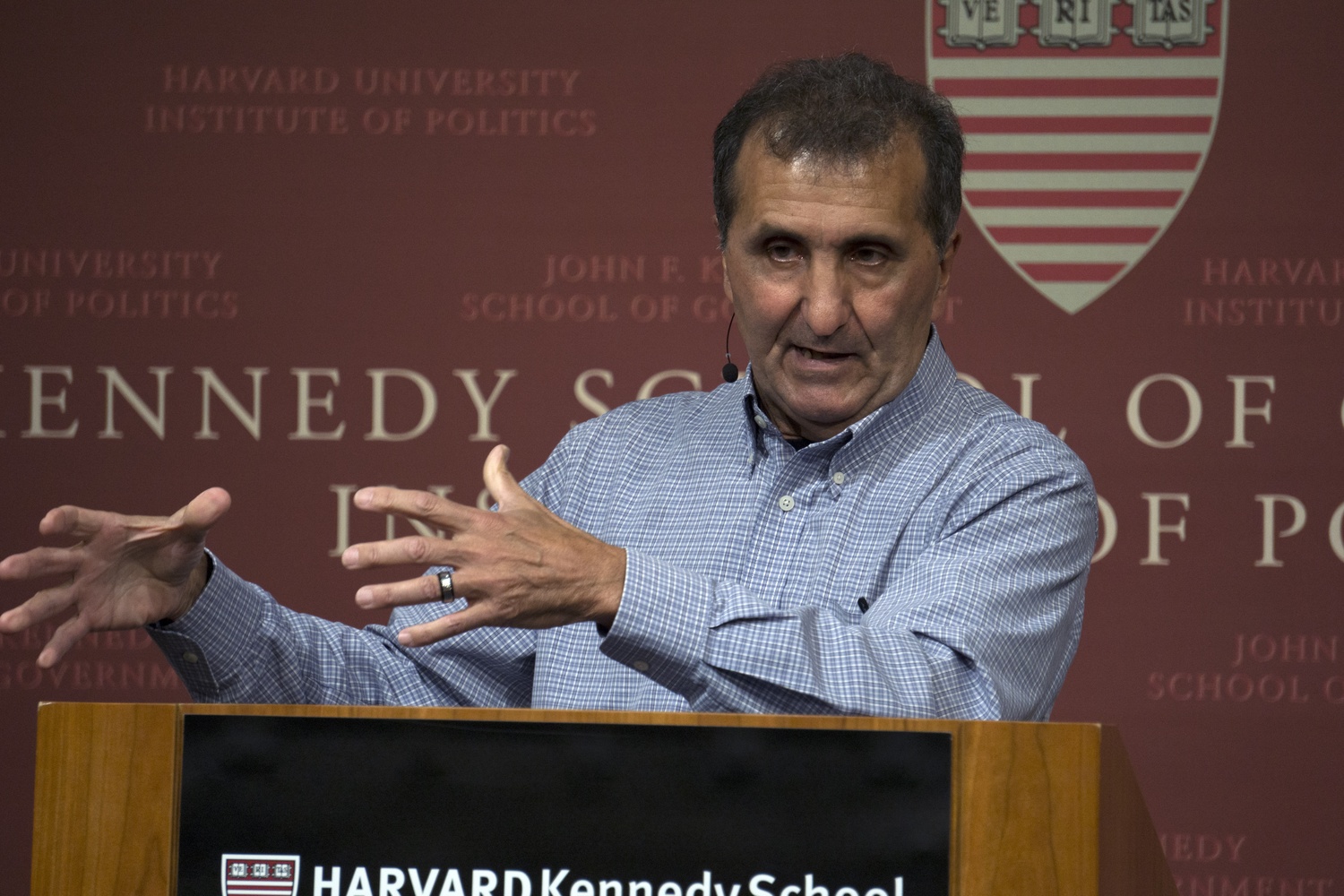 Pete Souza uses his photographs to reminisce the Obama years with audience members at the IOP Wednesday evening. Souza was the Chief Official White House Photographer for Presidents Ronald Reagan and Barack Obama. By Justin F. Gonzalez
By Alexandra A. Chaidez and Idil Tuysuzoglu, Contributing Writers

Pete Souza, the official photographer of the Reagan and Obama administrations, discussed his new book and shared some of the iconic images of his time at the White House at the Institute of Politics Wednesday.

Souza shot nearly two million photographs of the Obama administration, capturing events from the President Barack Obama’s 2008 inauguration to his visit to Newtown, Conn. following the 2012 school shooting there. At the IOP, Souza displayed a slideshow of featured photographs, offering commentary on the intimate moments behind them.

“I wanted it to be the best archive that we ever had of a President,” Souza said of his collection.

The event attracted students from several of Harvard’s schools due to Souza’s large following on Instagram, a platform which he uses now to post his old photos and political commentary on the current administration. Souza, who said he was once skeptical of Instagram, has since garnered 1.5 million followers and admitted his “unruliness” that is now a token of his page.

He showcased entire days spent in the White House, including the day the Affordable Care Act passed in Congress and the moments leading up to and following the 2016 election. For some students, like Aleesha Shaik, a student at the School of Public Health, the talk was a “coping mechanism for all of us as we [watch] the current administration.”

Souza said he often went to great lengths to secure the best photos of Obama both in and outside of the Oval Office. He recounted the memory of sleeping in his office during the “Snowmaggedon” blizzard of 2010 because he knew the young President and his daughters would eventually come out to play in the snow.

Although Souza claimed not to be the “greatest photographer in the world,” Daniel J. Balz—a 2017 fall fellow at the Institute of Politics and chief correspondent for The Washington Post—disagreed.

“I think anyone who ascends to be a White House photographer is a great photographer,” Balz said after the event. “You can see it in those shots...He has an artist’s eye in addition to having a documentarian’s sense of how you record the life of a presidency. I think he is a terrific photographer.”

Bahariah Bahadom, a student at the Harvard Kennedy School of Government, said she was an avid follower of Souza’s photography. “His pictures spell human,” Bahadom said. “He humanized all the pictures of the White House, and that for me spelled hope.”