On ‘Hey, I’m Just Like You,’ Tegan and Sara Come Home 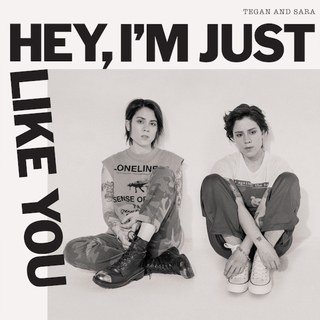 Album Art for Tegan and Sara's "Hey, I'm Just Like You." By Courtesy of Tegan and Sara Quin/Sire Records
By Clara V. Nguyen, Contributing Writer

It is easy to put our favorite musicians on a pedestal, especially those as innovative and prolific as Tegan and Sara Quin. Soon after recording their first demo albums in a Calgary, Alberta high school, the twins earned a devout following for their down-to-earth stage presence, ethereal voices, and passionate political activism. Despite their cult status in the indie music scene, Tegan and Sara set out to remind listeners of their humble roots with their latest studio release, aptly titled “Hey, I’m Just Like You.” Comprised of polished reimaginings of demos from the duo’s early days, the album is a jubilant celebration of youthful nonchalance.

Musical content aside, the album’s very structure is a bold creative statement. Artists who reuse older material must prove its contemporary relevance, and critics are quick to label their work as unoriginal or commercialistic. But Tegan and Sara have always taken pride in defying convention, and even the most ardent skeptics are sure to find merit in the result. Most people recall their early teenage years with a blend of embarrassment and confusion. However, Tegan and Sara unabashedly embrace the chaos of adolescence on “Hey, I’m Just Like You.” Each of the album’s 12 songs is a candid, introspective tribute to the excitement, frustration, and formative potential of growing up.

Out of the brooding languor of the album’s opener, “Hold My Breath Until I Die,” emerges its title track, an upbeat, carefree reflection on a drug-fueled night out with friends. The song alternates with jarring contrast between declarations of vulnerability and strength, held together by an undercurrent of softly resonant synth beats and laid-back acoustic guitar. “Sometimes you get tired of pretending like you’re so strong,” begins the second verse, followed immediately by a conflicting statement: “I always feel invincible when you’re around.” Throughout the album, the constantly shifting moods within and across tracks emphasize the instability of teenage emotions.

Tegan and Sara envisioned the music video for the album’s next single, “I’ll Be Back Someday,” as an “ode to anxiety.” The video opens with a shot of the duo in a monochrome blue room, suggesting a sense of melancholy and confinement. A beige landline phone rests on the back wall, interrupting the sea of blue wallpaper. As the video progresses and the background switches from blue to purple to brown, the phone remains the only constant fixture — a fitting role, given its importance in the song’s lyrics. “I wanna call and ask, ‘What's up?’ / Go to dial, but then I stop,” Tegan sings in the first verse, accompanied by electric guitar that intensifies steadily through the pre-chorus. Although the chorus is melodically and lyrically repetitive, especially by its third appearance in the song, the sisters’ precise vocal harmonies and palpable emotion save it from becoming grating.

As the last reverberating guitar chord of “I’ll Be Back Someday” fades into silence, a new kind of instrumentation takes shape: the improvisatory keyboard flourishes that introduce the album’s next track and final promo single, “Don’t Believe the Things They Tell You (They Lie).” The slow, reflective song relies on a subtly syncopated drum beat to maintain its momentum until a defiant electric guitar solo blossoms out of the second chorus. The change in tone is sudden without sounding out of place — further evidence of the band’s gift for transitions between states of mind.

From there, the sisters fill the rest of the album with similarly wistful lyrics and airy, layered vocals. No track is over four minutes long, allowing each one to shine as a brief glimpse into a different aspect of adolescent life. The final track, “All I Have to Give the World is Me,” begins as an admission of insecurity but develops into a powerful affirmation of artistic identity. “All I have to show the world is me, that’s it,” the sisters sing in the chorus. With the freshness and sincerity of “Hey, I’m Just Like You,” they’ve given us more than enough.