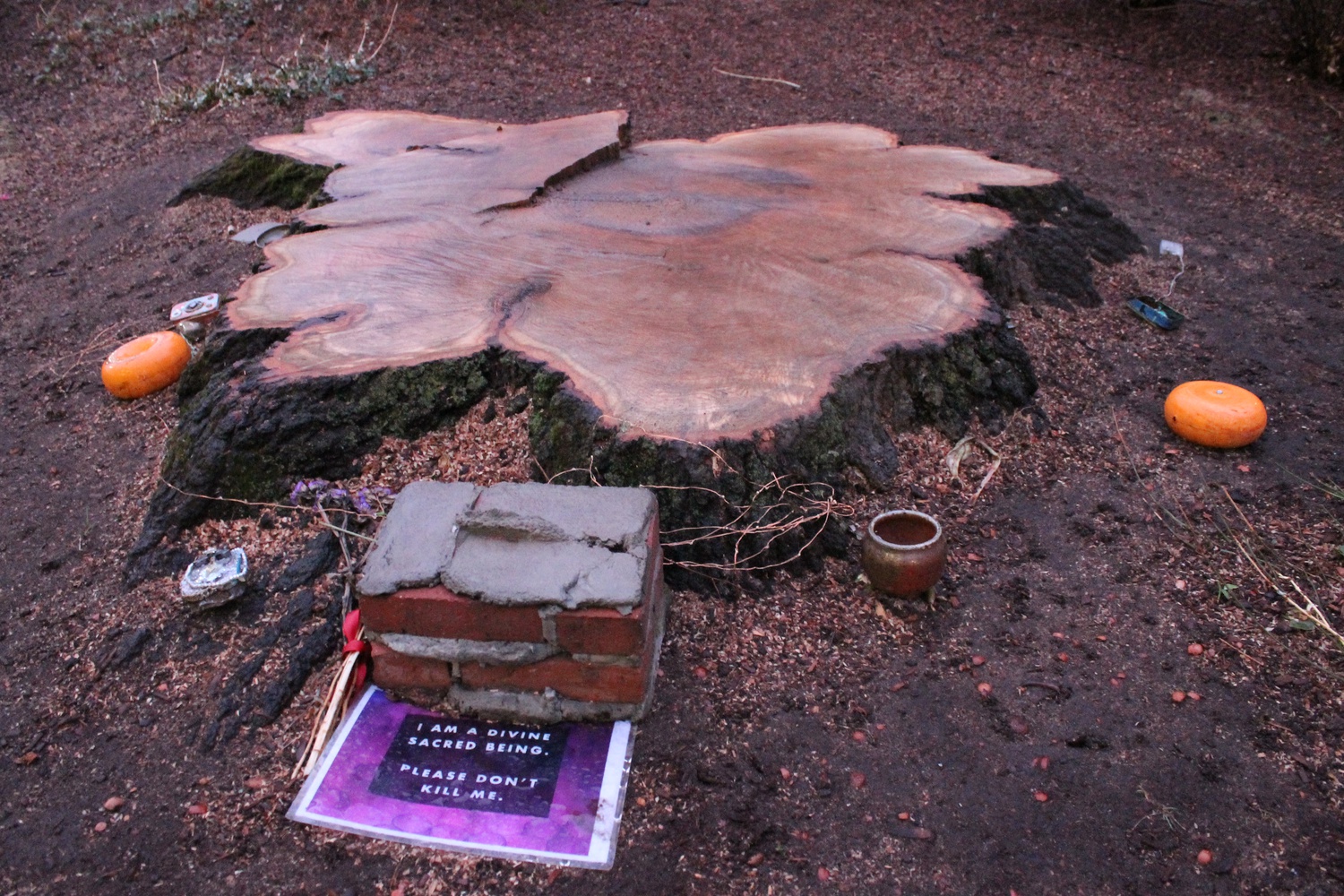 A century-old tree at the Divinity School was cut down last week after months of debate. By Chloe I. Yu
By Matteo N. Wong, Crimson Staff Writer

The Divinity School announced the tree’s impending removal in September as part of planned renovations to Andover Hall. In the ensuing months, students concerned with the tree’s sanctity and environmental value negotiated back and forth with administrators to try and save the oak.

After Harvard’s arborist declared the tree’s health “significantly compromised” in the fall, students continued protesting the tree’s removal in the hopes it could be saved. The school hired outside company Bartlett Tree experts to assess the tree, and in February the tree management company concluded the oak was at “high risk” of failure. The city of Cambridge’s arborist also agreed the tree should be taken down.

Later that month, the Divinity School published a statement on its website that “there is no choice but to remove the tree.”

In early March, administrators emailed students to say the tree would be removed over spring break. The date was then pushed back after students demanded more time to plan a mourning ritual.

“We protested that and the administration said we could have an extra week,” said Mary K. Balkon, a Divinity School student who helped organize the ritual.

The ceremony was held Wednesday evening and lasted about two hours, with dozens in attendance.

“It was a really moving ritual and people stayed for two hours in the cold,” Divinity School student Gretchen T. Legler said.

The gathering began with Divinity School community members sharing stories about the tree’s importance. There were poetry recitations, singing, and a reading of “The Giving Tree” by Shel Silverstein. Legler passed out cookies baked with flour made from the tree’s acorns.

“In the fall I collected acorns and processed them into acorn flour, so I made these acorn cookies that I gave out at the ritual as a sort of acorn communion,” Legler said. “My message was that the oak tree nourishes our spirits, but in the form of this wafer it also nourishes our bodies.”

A number of Divinity School faculty spoke at the ritual, including Professor of Buddhist Studies Janet Gyatso. In her remarks, she praised and apologized to the tree.

“I admired and praised the oak tree’s exceptional beauty, expressed deep thanks to the tree for its many years of wonderful shade that it provided to the Divinity School community, and apologized sorrowfully to it for the fact that it was being taken down,” Gyatso wrote in an email.

Attendees then formed a circle around the tree to bless it.

“Almost every religion has some kind of sacred tree or trees that serve sacred functions in its stories,” Balkon said. “So we asked people from different religions to remember those trees and ask for blessings for this tree in memory of those trees.”

On Friday, a smaller group of students gathered to witness the tree being cut down. The night before, someone had spray painted on the tree, “Be careful of the squirrels,” and “Goodbye humans, good luck, you’ll need it,” according to multiple students.

Some students who watched the tree be cut down, including Balkon, said the inside of the felled oak appeared healthy to them, but a number of arborists who have previously examined the tree have said otherwise.

During the removal, pieces of the tree, such as parts of branches or wood chips, were made available to community members to take with them. Acorns from the tree were also saved to germinate and be grown later on, according to Michael P. Naughton, a Divinity School spokesperson.

Parts of the tree are being stored while students and administrators discuss whether and how to reuse the wood. Though some students want the wood incorporated into a new structure, others believe reusing the tree would be disrespectful, Balkon said.

“I think one of the things that emerged as most important in that conversation was that people very much wanted this tree remembered,” Balkon said.

A previous version of this article misspelled Mary Balkon's name.